Interlude 3, the last one in this vol..err, chapter one! 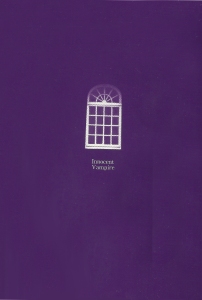 Protagonist in this chapter isn’t Hiyuki, she using 私 for her inner monologue, so I assume the protag is a woman.

I met that boy during my part time job at a local supermarket.

I wonder if he’s a middle school student?

A pretty boy huh? That was my impression of him in my eyes.

Later, I was informed that he already graduated from middle school long ago, and he is currently aiming to get into a university for telecommunication. I couldn’t believe it.

“Things like my hair and height were caused by malnutrition.”

I was thinking that what he said in self-mockery was a joke at first. In these modern times, I’m convinced without a basis that something like malnutrition can’t happen, but someway or another I realized that it was the truth and was surprised later on.

Because that child had such a stand out appearance, all other co-workers got interested and talked to him. Though he replied to them warmly, he drew a cold line somewhere and vaguely gave off an unapproachable atmosphere. Gradually, the assertive co-workers who wanted to talk to him left, but he himself on the contrary showed untroubled behavior, instead he was whistling.

Well, but not for me, I became interested in him all of a sudden. As I had free time during lunch break, when it was time to return, I quickly went to address him.

“You really are a strange person.”
‘It’s just a waste of money.’ he said unwillingly as I persuaded him to eat at a fast food restaurant before he leaves. Then, he ordered the cheapest meal, he literally doesn’t have any money. So, as we meet face to face he said these words and I tilted my head in puzzlement.

“Yes it is. Almost everybody reads the atmosphere that I don’t want to be approached.”

“Hmmm, perhaps that’s true if you say it like that, it’s just that I’m kinda interested in you. There are no young people who have philosophic view likes you around me.”

“You seem like a `curiosity kills the cat’ type of person huh. But well that meaning has its own vitality, so I’ll give you my respect”.

And then, we continued the conversation without stopping. (Or perhaps I should say, it was in a pattern where I was asking him one sidedly and he replied tiresomely)

He lost both of his parent and was living alone.
He worked 2 years ago in the supermarket by his guarantor.
On holidays he studies for the university exam in the library.
His hobby is playing net games.

“Leave me alone. People on the net mutually remain anonymous, so there are no troublesome human relationship parts, and it’s comfortable.”

The one who unreasonably invited him before he left and asked him to tell such a story is me so I am going to pay for both of us, but as I am about to do so, he stubbornly refused to accept it even though it was only a small amount.

“I hate lending and borrowing. Let’s pay for our own shares.”

“But I don’t think this amount would be like that. In the first place I was the one who invited you here, and you must have borrowed like this before right?”

“You’re wrong.” He declared it with a cold tone. “In all cases, the one who is giving out the money will dominate the other person mentally.”

And then at every opportunity, when we were returning from work, we enjoyed ourselves with idle chat and tea time (Well, perhaps the one who enjoy themselves was just me, but it doesn’t mean he also disliked being accompanied).
Although considering his situation, he doesn’t have money. Each time it was coffee from a convenience store or sitting in a park while drinking canned juice.

After chatting like this several times, his private side was revealed gradually.

“Well, my family was very prosperous when I was born. My parents had a high social standing and they both loved me, but before I turned 10, they got in an accident.”

“After that it was like a blur. My kind grandparents and relatives whom I considered my own family joined forces, and together took all my parents’ assets, using all kinds of reasons why they snatched away everything.”

“Then finally one of them declared themselves my guardian. I was taken to my uncle’s family house where my eldest cousin lived. Well when it comes to this, there a lot of this story already, I was physically and mentally abused. When I turned 13 years old, my body suddenly stopped growing.”

“As you would expect I couldn’t endure it anymore, so I called the police and the school. But well… comparing a kid complaining to my uncle who had a high social standing, was renowned in his neighborhood, and was a government administrator, it was clear that they didn’t believe anything I said. And then my treatments became way crueler.”

“More than that what really harmed me was my eldest cousin. When someone gets around the ages of a middle school kid, they become interested in sex right? Then, because he took notice of my outward appearance, in addition with my mental and physical abuse, it reached a point where I was getting sexual abuse.”

“Well, it’s because of my ignorance of something like property. All that happened is me reaping what I sowed, but in the very least, I had to save my remaining body and soul.”

“As I escaped from home and wandered aimlessly, I was picked up by a caseworker. Nowadays, that sort of thing like violence and abuse had become a big social problem, so I was taken to a shelter. Even now I still feel it.”

“Aah…it’s not like I’m thinking my own life is sorrowful or miserable, there are lot of people who born with an incurable diseases, and there are 7% of people in this world if you search for it who have trouble finding water to drink.”

“Yes, I don’t particularly think my relatives and uncle are bad people either. In this world there is no such thing as benevolence or unselfish love. Humans consider what things convenience themselves. Although that’s how humans act, I’m still hoping for some selflessness. Good grief, what a soft person I am.”

“Or more precisely… I wonder if there really are bad people and good people? The day until my parents died, I considered them as good people. Even now if we take a prospective from other people, they’re good people.”

“That’s why you missed the mark when saying that I have a philosophic views. It was simply my cowardice.”

Shortly thereafter, he died in an unfortunate accident.

Not long afterward, the net game which he often played was also closed down. The company originally intended to operate it for 5 years, but it was losing popularity to the more recent net game, therefore they decided to shut it down, or so I read about it in a blog.

That’s why, today, 1 year after the accident, I placed a banquet of red roses, the flower which he said he liked, at the place of the accident. Then I join my hands together and prayed.

“Seems you love flowers eh, especially rose flowers. Did you know? On a grape field to produce wine in France, people were planting rose flowers. It was said that from long ago rose flowers made up the alarm warning that diseases were coming. Even though they are such frail things, they defend themselves with thorny scrubs, isn’t that lovable?”

I wonder if you know it. The meaning of red rose in language of flowers is ‘Passion’ and ‘Love’.

You had said with your own words that you don’t believe such thing as love, but the truth is you wanted to believed in it right?

Although I won’t hear a reply anymore, I like the things about you.

Did Hiyuki having inconsistency in her behavior principle? There were many if I’m pointing all out, so I just display her base of thought just a bit: ‘I won’t to steal other people life’, ‘I won’t to steal other people fortune’, ‘I won’t snatch other people place’, these thing is what Hiyuki considered about her minimum pact for  humankind. Then again, human is a being who carried out their action based on what they consider benefit for themselves; therefore she had no choice but didn’t believe on them and conduct her own self-defense. However, the truth is she wants to believe in them, that contradiction itself one revealed in her idea of thought when argued against Collard. (TL: when Collard is pleading for her help in stampede disaster)

So, for the first time she plays the game is when she was taken into the shelter. She plays disregard the tutorial and distribute the status point by her own judgement.